In 1762, John Montagu, the 4th Earl of Sandwich, was deep in the middle of an expensive game of cards when hunger overtook him and his fellow gambler.

The ‘done’ thing would’ve been to repair to the dining room for sustenance, but that involved setting the deck down and taking up cutlery instead. Montagu declared that he would take his meat indeed, but only between two slices of bread so they could keep on playing without messing up the cards.

So, as legend has it, the sandwich was born. Born in England, at least—flatbreads as a means of encompassing a moist filling had been au fait in Mediterranean Europe for centuries beforehand, and it’s likely that the widely travelled Earl took his inspiration from his time in the Greek islands. 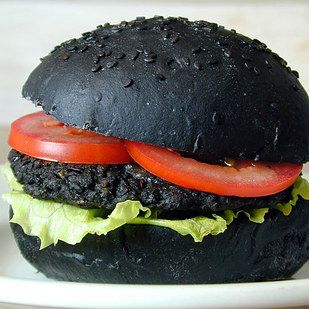 There are several things we miss about bread when following the keto lifestyle. As we’ve just indicated, the convenience of keeping our hands clean by eating a burger between halves of a roll is not to be underestimated.

But it’s more than about tidiness or convenience—it’s about texture and mouthfeel. It’s about the contrast of soft chewiness with moist fillings. At a push you can make wrappings out of iceberg lettuce leaves, sure.

But because they’re not remotely filling (and seriously bad at containing sauces), they just don’t cut the mustard. Even when you’ve actually put mustard on your burger.

No, some of us miss bread too much to miss out altogether, which is why it’s great to have a viable alternative that gives you the wonderful texture contrast while restraining the spiked insulin response which typically comes from the sugars in a bread roll.

Brioche buns are particularly damaging in this respect.

These buns are black because of the 4g sachet of squid ink to be mixed into your dry ingredients. Although squid ink is derived from a cephalopod, which is not part of the crustacean family, you may want to swerve these buns if you have a shellfish allergy and the idea of squid ink makes you nervous.

If you’ve never tried squid ink before, it gives a lovely mid-tongue savory tang to your food without turning your tongue or lips black!

Because this recipe requires a little planning to make sure that everything runs smoothly, we’ve listed all the ingredients below, followed by the equipment you’ll need. And then we’ve written out the process in four stages to help you visualize how it all comes together.

This does mean repeating a few details, but we don’t believe in creating an air of mystery where food preparation is concerned. We’ve provided Amazon links to the less common ingredients so that you can plan your shopping ahead of time.

This recipe will make 3 buns which are gluten and dairy free, and keto- and paleo-friendly. Other possible allergens to be aware of include eggs and almond.

Equipment you will need

* If you’re unable to get the sachets, then use 1 tbsp of liquid ink and introduce to the dry mix AFTER stage 3.

Mix all the dry ingredients into the large bowl. Make sure you sift the almond flour, pressing it through a fine sieve if necessary. Like cornflour, it tends to clump together in storage. Give everything a good stir.

If you have had to buy liquid ink, then leave that to one side for now.

Add the egg to the separated egg yolk, then stir in the vinegar and the 3tbsp of melted butter. Whisk mercilessly with the fork.

If you are using squid ink powder, then slowly introduce ¼ cup of boiling water into the dry mix and stir well until you have a thick, sticky dough. 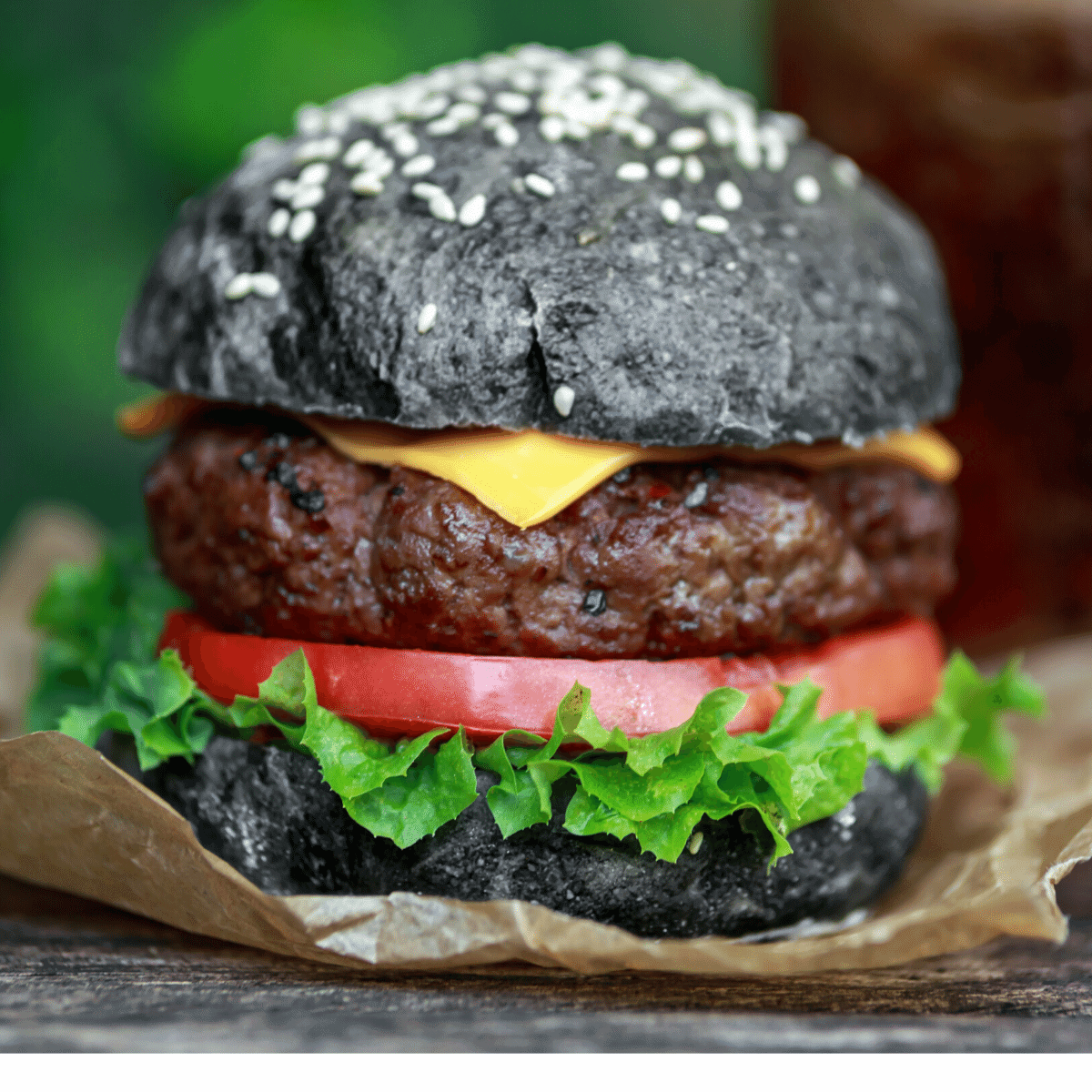 How will you know when the rolls are done?

If they haven’t risen much, don’t worry. They will look glossy yet dry and lava-like. When they have cooled down some, turn one upside down and knock it with your knuckles.

If all the flour has cooked out, they should be light and they should sound quite hollow. If they still seem a little dense, give them another five minutes.

What’s the nutritional value for each roll?

The rolls are around 385 calories each. We’re rounding up to the nearest 5g for that safe margin of error, but the proportions step up as follows: 5g fiber; 10g complex carbs; 15g protein and 35g fat. There is very little sodium overall and they are very filling.

How long can you keep them?

2-3 days in the fridge, either in a sealed container or bag.

Can I make these rolls without the ink?

Sure. We appreciate that it’s something of an acquired taste and concept. Leaving out the ink won’t compromise the volume or structure of the rolls overmuch. They will longer be black buns, of course, and will lack that mildly briny tang.

Don’t compensate by switching the 4g ink sachet/1tbsp liquid for a salty equivalent, though. Upping sodium levels will just make your buns salty.

Can you serve this bread other ways?

Sure. Instead of dividing it into rolls, you can spread it out into a rectangle ½ thick on the cookie sheet. Bake for 20 minutes. Top with red or green pesto and slices of mozzarella.

Bake for a further 15 minutes until the cheese is melted. Serve with basic leaves scattered on top.

What happens if I leave out the erythritol?

There isn’t much benefit to leaving out that tiny amount of sweetening agent. It balances the almond flour and psyllium husk, even if you’ve stepped away from the ink.

It’s a naturally occuring chemical compound which has a cooling taste in the mouth similar to the experience of sweetness. As a sugar alcohol, derived from corn fermentation, it has just over a tenth of the calories you find in refined sugar.

There’s little to gain from opting for something like granulated xylitol or stevia instead as they can have quite artificial aftertastes.

If erythritol is just a temporary hassle to get a hold of, Allulose is probably the next closest substitute.

Is it true that sweeteners can raise your insulin levels the same as sugar?

The science is divided on this point as much as social opinion based on half-reported science.

Truthfully, we don't know for sure. Yet. However, there are four commonly accepted facts about the way that insulin works, and what we can do to get our blood sugars under control. They’re good building blocks to work with.

Firstly, it’s accepted by all parties that eating any kind of carbohydrate, even those smaller amounts in fruits and vegetables, will cause a rise in blood sugar levels.

Secondly, it’s accepted that insulin is released to unlock sugar from the bloodstream so that it can either feed cells as immediate energy or be stored as fat in cases of sugar excess.

Thirdly, it’s accepted that the release of insulin can occur before any sugar hits the bloodstream at all. Sometimes just the sight, smell or taste of food, without any significant ingestion, is significant enough for the pancreas to release the insulin hormone in preparation. This is called cephalic phase insulin release.

Now, where opinions divide is the extent to which artificial sweetener is responsible for a disproportionate rise in cephalic insulin release. This is the part of the equation that remains under scientific debate.

What we do know is that tight control of ingested carbohydrates, whether those are complex starches or simple sugars, leads in the longer term to a situation where our insulin resistance lessens.

In other words, we do not need to produce as much insulin to deal with the amount of sugar coming into the bloodstream, so insulin production stabilizes. One byproduct is weight loss because the liver has to break down glycogen to supplement the lack of sugar being unlocked from the bloodstream.

An even greater victory is that our bodies, particularly the pancreas, are under less stress. Less stress means a lesser production of cortisol, which can inhibit the efficient use of sugar and other nutrients in the bloodstream.

In short, you have everything to gain by playing the long game. If that involves making your way of eating more sustainable by allowing a little artificial sweetener (or sugar alcohol) to grace your diet, then this is a victory in itself.

You are getting a better handle on a healthy way of eating which supports your body's metabolism, hormone production, and digestive processes. A tiny amount of sweetener may well trigger cephalic insulin release, but the overall impact that this will have on your health is nominal in comparison to the achievement of controlling your blood sugar levels as a matter of course.

Keto is a way of life—not an extended exercise in deprivation.