The ketogenic can make some dramatic changes to your body – that’s the idea.  You want your body to turn to fat sources for its energy so you can lose any, or at least some, of the unnecessary body fat that you might find yourself with.

But, as you may know, it’s only achieved by ditching those carbs.  And none of us wants to give up on carbs forever.  Or even one day longer than we have to.

So it’s really good to learn the different signs of ketosis.  First so you can be encouraged that your body finally got there, and because it can be frustrating not knowing.  You really want to see if your hard work of avoiding carbs is starting to pay off.

And then secondly, if you’ve seen that you’ve had some of the symptoms for quite a while, and you’re finding them rather unpleasant, you can decide for yourself whether you’re ready to call it a day.

Also, if you find yourself suffering with some sort of ailment, then it’s nice to put it down to something yourself rather than have to pay a doctor for a consultation.

Furthermore, when your body has reached ketosis, since it’s using more efficient fuel sources of energy, then your body won’t need quite as many calories to keep ticking over.  So it is when you reach the point of ketosis that you can best decide whether it’s safe to decrease your calorie intake.

The thing is, ketosis is not the same for everybody, and your experience of ketosis may not match that of the next person.

But the more of the ketosis signs and symptoms you’re aware of, the more confident you can be about whether you’ve reached ketosis and then you can establish approximately how long you’ve been in ketosis, and then make a plan as to what to do next.

So, what follows next is a quick list of the different signs of ketosis, and then we will touch a little upon each sign, before wrapping up with a little conclusion.

We’re not going to order them according to what are the most notable or significant changes, but rather in the order of how the different signs might show themselves.  And we’re not going to go too much into the whys and wherefores, that’s for another day.

So now that we’ve listed them all, let’s take a closer look at each sign.

One of the first signs you’ll spot as you start to go into ketosis is that you’ll have a dry mouth, and you will be feeling thirsty more often.  That is because the keto diet makes you lose a lot of water.

It is important that you don’t ignore this sign, and that you use it as a prompt to drink more water.  It’s important to stay hydrated, and keep flushing out any nasty toxins.  You can safely keep drinking water as much as you like, there is no upper limit as to how much water you can drink.

Another sign in the first stage of ketosis, is the need to pee more often.

And this will become more noticeable if you follow the advice we gave above and you keep yourself properly hydrated.

This is because your insulin tells your kidneys to release all that excess sodium and water that you’ve been carrying around.

You may see some weight loss at this stage, but you won’t have necessarily turned your body into full ketosis just yet.  But you’re certainly heading in that direction, and that’s the reassuring bit of having to deal with such an inconvenient symptom.

Another early sign that occurs very early on in ketosis is bad breath.

This happens because your liver begins producing ketones like acetone, which are excreted in a number of ways, including in your breath.

Your companions are quite likely to notice the difference, but the good news is that for many people the smell is not that bad.  Some people describe it as a fruity smell, while some people say it smells more like nail polish remover.

These ketones are also released in your pee, so your pee may start to smell different too.

For some people these ketones are also released in their sweat, so be sure to use an anti-perspirant deodorant.

The next sign is changes in your body’s digestion.

As your body adapts to burning fat for its energy, and your diet is composed more predominantly of fat, then your body’s digestion may alter in one of two ways.  You could either find yourself suffering from constipation, or your body may go to the other extreme and give you diarrhea.

Whichever way it goes, if it changes at all, it’s perfectly manageable. The two most important things you can do to rectify either situation is to eat more fibre and drink more water.

Other tips include taking in more Vitamin C and more salt.

As your body turns to fat cells for its energy, there’s a lower need for calories from food, and you should find your more high fat diet sufficiently satiating that you can go without food or snacks for a longer amount of time.

This is why some people try intermittent fasting when also on a ketogenic diet, because it’s more comfortable to endure.

You may be surprised to see this sign in here, given how much people rave about having more energy during ketosis.  But you don’t get to the high energy stage straight away, your body builds up to it.

Your body has a lot to adapt to at this stage.  Your body’s cells are busy burning up what little remains in the glycogen stores of your cells, they’re getting depleted, and at the same time your liver is ramping things up producing more and more ketones.

If your previous dietary habits are quite different to the ketogenic diet, then this phenomenon could be quite dramatic and you could start to feel really really tired.

But the good news is that it doesn’t last.  Unfortunately it is an important part of the process, but please hang on in there because it could be just the transformation your body needs in the long run.

Despite feeling more tired and fatigued, unfortunately you may find that you have trouble sleeping.  Ironic isn’t it?  And perhaps not fair.

The insomnia comes about due to your body having lower levels of melatonin and serotonin, but this is something that will eventually get rebalanced.

So, again, this is just a temporary feature, and in time you’ll soon be enjoying much deeper sleep.

When your body is fully rebalanced you should then also need less sleep, due to your improved sleep quality and higher energy levels.

Now this is one of the better signs of ketosis!

Once your body has made that switch from burning carbs to burning fat, you’ll find you have loads more energy, huge increases in fact.  Your body’s metabolism has effectively been rebooted to function at its best.

Instead of those horrible insulin spikes and crashes, your blood sugar will be much more leveled out, and you should not only have more energy, but you should feel like your on more even keel as well.

You may actually begin to lose weight as soon as your liver starts to produce ketones, but in the beginning much of this weight will be water.

However a big drop of weight should follow.  Some people will lose a lot of weight.  People have sometimes been known to lose up to 20 pounds in the first month.

We can’t predict how much weight you will lose on the ketogenic diet, as it’s different for everybody.

Some people also notice a drop in blood pressure.

Testing positive in a ketosis test

You can also take ketosis tests, and these are the most accurate way to test for it, rather than simply trying to judge from the other signs we listed above.

You could try a urine analysis strip, like the one on this link: 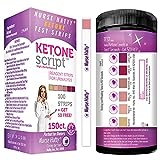 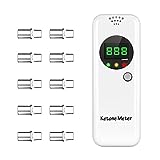 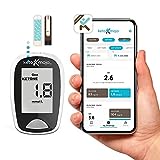 We’ve now covered all the different signs you might see as your body goes into ketosis and comes out the other side.

No-one knows your body better than you, so you are now well placed to judge exactly where you are on your ketosis journey.  But by all means take a test if you want to be sure.  We admit many of the signs you might see can sometimes be caused by other factors.

We wish you all the best in your weight loss, and if you’re still dieting, be sure to check out some of our keto recipes – yum!

Richmond Howard started Meal Prepify in 2019 and has helped over a million people learn how to meal prep, get better at meal planning, and create a kitchen they love to use. He’s an avid home chef and loves to bbq, grill out, and make awesome food for family and friends. He’s been featured on MSN, Renaissance Periodization, and Good Financial Cents.