Eggnog is such a warming drink that many people associate with the holidays. Traditional eggnog is made of milk or cream, sugar, raw eggs, alcohol, and spices such as vanilla or nutmeg.

While this concoction sounds lovely for some people, others find this quite isolating due to the lack of keto-friendly or dairy-free alternatives. 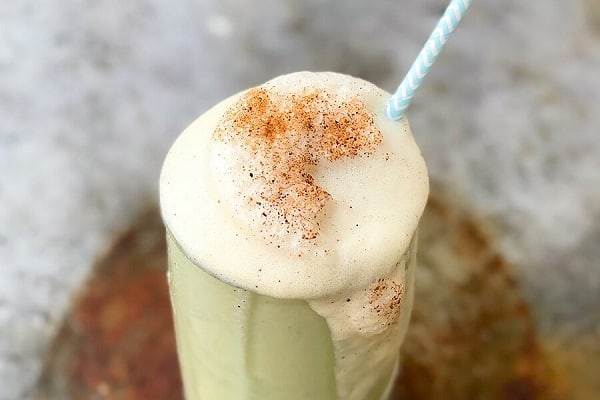 Well, fear not, as we have you covered. With more people converting to the keto diet, newer recipes are emerging that allow more people to enjoy the traditional holiday beverage.

Not only is this eggnog keto-friendly, but it’s also delicious! Creamy, sweet, and alcoholic, what more could you ask for around Christmas time?

Around the holidays is where you want to indulge and enjoy sweet treats. However, a keto diet is strict and you might not want to compromise all of the work you’ve done so far just for one drink. So, how do you compromise between indulging and restricting yourself?

This keto eggnog recipe is the ideal answer to all your troubles. It’s thick and sweet like custard, with a touch of Christmas cheer in the form of nutmeg and vanilla.

Eggnog is made primarily with eggs, with some dairy products added in and sometimes even a spirit or two. Sweetener is also added to add to the taste, and spices like nutmeg or cinnamon can also be used to enhance the flavor.

Eggnog is traditionally made and served during the winter during the holiday season, and the added spirits can be used to warm you up. It is often served at holiday parties which is one of the reasons why most associate it with Christmas.

The Taste of Christmas

Eggnog tastes of whatever you add to the recipe - nutmeg, cinnamon, or even honey. Even though it is made from eggs, eggnog does not usually taste like such and the cream often overpowers the flavor.

Sweetener is added to eggnog to make it taste sweeter, so most people consider it a dessert rather than a drink. Many people say that eggnog tastes like a glass of melted vanilla ice cream! If you add alcohol into your eggnog it is of course going to come along with a kick.

Can Eggnog be Keto-Friendly?

Store-bought or traditional eggnog is not considered keto-friendly because it is made with cow milk and sugar, which both include a lot of carbohydrates. Luckily, eggnog can be made at home under ten minutes, and you can manipulate the recipe to make it keto-friendly.

Simply cut out the cow milk and sugar and replace it with keto-friendly alternatives such as plant-based milk and sweetener! The recipe that we found has only 3.3 net carbs per serving, which makes this the ideal sweet treat to enjoy while not breaking your diet.

Which Sweetener is Best to Use to Make Keto-Friendly Eggnog?

Sugar is incredibly high in carbohydrates, so that is automatically out of the running to be the best sweetener for keto-friendly eggnog. Instead, you need to find a ketogenic sweetener that contains either no carbs or very little carbs.

Just like sugar, there are different types of sweeteners that work best with baking. Granulated sweeteners, like the ones you’d put in coffee, are two grainy and coarse to use in homemade eggnog. The sweetener would leave your drink with a sandy texture because the sweetener doesn’t dissolve very easily.

Is Homemade Eggnog Safe to Consume?

Traditionally made eggnog uses raw egg whites in the mixture to create a thick consistency. Some people worry that this makes the drink unsafe for consumption with the risk of salmonella being found in the eggs.

While this is true, it is unlikely that you’ll contract salmonella this way. Eggs are screened thoroughly before being sold which prevents you from being at risk from the dangerous bacteria.

However, if you’re still worried about the raw eggs, pasteurized eggs can be used instead. Alternatively, you could heat the mixture while you’re mixing the eggs into it to ensure that they cook while it’s being made.

The keto eggnog recipe that we’ll be detailing below only uses egg yolks rather than the whites as well. Heavy cream is substituted in for egg whites to eliminate the worry of harmful bacteria.

The process of making eggnog at home is somewhat tricky and often harder than you’d originally imagine. However, we’ve attempted to make it as simple as possible by providing easy to follow steps. Take it slow and don’t rush perfection!

The first step, if you haven’t already done so, is to separate the egg yolks from the egg whites. The most common method of doing this is to crack the egg in half and slowly pass the yolk back and forth between the two shell cups.

Make sure to be careful not to break the yolk while you’re doing so. There should be no egg white left by the time you’ve finished separating them, and breaking the yolk would make this very difficult to complete. 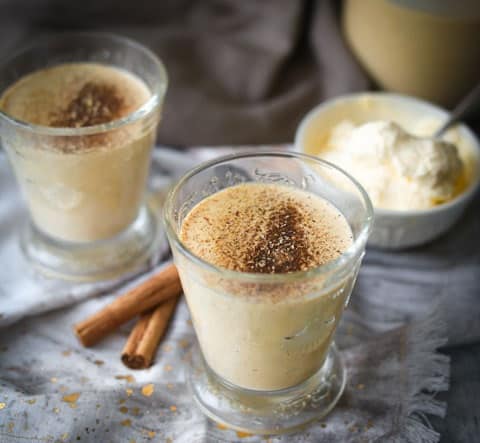 Put the egg yolks into a saucepan (make sure it’s large enough to fit all of the ingredients!) and add in the heavy cream, almond milk, and sweetener.

Turn the stove onto a medium heat and whisk the mixture continuously until it reaches 160 degrees in temperature. Don’t try and rush things - keep the heat at a medium temperature and don’t try it on high.

The mixture should reach 160 degrees slowly and steadily, and it should not be brought to the boiling point. This will take a little longer to achieve, but the results will be well worth it.

Once the eggnog has reached the desired temperature, take it off the heat and add the vanilla essence and nutmeg. Whisk these into the mixture lightly and leave it alone to cool for the next couple of hours.

Once it’s time to serve, pour it into a glass and top with anything you like!

Potential Additions to Your Keto-Friendly Eggnog

Now, we think that this recipe for keto eggnog is perfect on its own; however, there is always a way to make something even better - right? If you’re treating yourself, you may as well go bigger and better.

One of the best additions to eggnog is whipped cream. Eggnog is thick enough to allow the cream to sit on top of it without the drink collapsing in on itself and ruining the texture. Of course, traditional whipped cream is not keto-friendly.

Luckily, keto-friendly whipped cream is quite straightforward to make, albeit a little time-consuming. Simply whip together heavy cream, keto-friendly sweetener, and vanilla essence.

Alternatively, you could whip up some egg whites and top your eggnog off with them. Or, if you’re feeling in a party mood, add a splash of brandy, bourbon, or rum. Top it all off with a sprinkling of nutmeg, and it’s ready to drink.

Yes, a lot of liquors are keto-friendly because they contain no carbohydrates or sugars. Rum, brandy, and bourbon are among the types of alcohol that are keto-friendly, and they just so happen to also be the best spirits to add to eggnog.

If you prefer your eggnog with a hint of spirits, by all means, go ahead and enjoy the drink how you like it. We will say; however, that a little goes a long way with spirits and you don’t want to overpower the delicious flavors with alcohol, so make sure that you don’t add too much to one glass.

When to Serve Eggnog

Eggnog is a festive drink, and everyone knows that all rules go out the window during the holiday season! We think that eggnog can be served at any point in the day, but there is something so appealing to a glass of eggnog while it’s dark and cold outside.

Maybe it’s the fact that eggnog is often served at winter festivals and holiday parties. Particularly if you’re adding alcohol to the mix, we think that the ideal time to serve eggnog is in the evening.

However, it can also be a great addition to brunch. As we said, there are no rules abided by during the holidays, so if you want to have a splash of rum at brunch, go right ahead! Eggnog can also be served as a dessert after dinner.

How To Store Eggnog

The recipe that we detailed above contains four servings, so if you don’t finish it all in one day don’t worry. You can refrigerate it to make it last for 2 to 3 days. Put it in a container and keep it in the refrigerator until you want to have another glass.

Just make sure to stir or shake it up before serving it again, as there is the potential for the ingredients to separate during storage.

There we have it! A great tasting keto eggnog that you can enjoy without worrying about ruining all the hard work you’ve put into your diet. We hope that you’ve learned some interesting information about eggnog, and feel confident to whip up a batch for yourself to share with your loved ones this holiday season.

Don’t forget to use a sweetener with a finer texture than traditional granulated sugar, and always keep the spirits handy in case you want to add a splash of warmth to your drink. This keto eggnog serves up to four people and can be kept in the refrigerator for up to three days, so nothing will get wasted.

Whipped cream or egg whites complement the drink perfectly, and a sprinkling of spice will make it look like the drink came straight out of a gourmet kitchen. Have a glass for us and enjoy it!