A dish native to America, cornbread has become a popular foodstuff around the globe. Its light, grainy texture can be sweet or plain and possesses a unique flavor that makes it perfect to be served as a side with soups, chilis, pork roast crackling or garlic herb butter roast chicken.

Cornbread achieves its crunchy, buttery crust by pouring batter into a sizzling hot skillet, cooking it until you get that thick, dark-yellow crisp at the edges. However, not everyone has access to a cast-iron skillet commonly used for cornbread, so a baking dish or, as we mention later, a muffin tin will do the trick.

Cornbread is traditionally made with, you guessed it, corn! Along with flour, butter, buttermilk and eggs, cornmeal is a key component of cornbread, with many people mixing the ratio between the cornbread and the flour to achieve textures that range from light and cakey to a much denser, corn-heavy consistency.

However, cornmeal is very high in carbohydrates, which obviously runs counter to the keto philosophy. Let’s delve a little into the keto diet before looking at how our keto cornbread bends itself around the very definition of cornbread!

The keto diet is all the rage in healthy-eating circles, its key principle being to minimize carbs and increase your intake of high-fat and moderate-protein foods, supplemented by various fibers. This causes the body to switch into producing ketones in the liver from the fat you eat and the fat in your body.

In short, the ketogenic diet has been proven to be the very best in fat-stripping diets and has gathered thousands of advocates in the healthy-eating industry. However, it requires precision monitoring of carbs, fats and proteins, meaning that one single high-carb meal can send your macros spinning out of control!

Okay, you’ve rumbled us. Technically, keto cornbread doesn’t actually contain any corn! That’s right, you heard. But don’t worry, we’ll allow you a second or two to process that information.

Rather than using the traditional cornmeal, keto cornbread is made from almond flour, coconut flour and baking powder, mixed together to create almond cornflour! Clever, huh?

This customized keto cornbread recipe was developed from modifying the recipe for keto blueberry muffins.

Almond cornflour is much lower in carbohydrates that regular cornflour, bringing it comfortably within the boundaries of the ketogenic diet. Add a little dose of sweet corn extract and your keto cornbread will have that extra corniness that will make it completely indistinguishable from the traditional all-American cornbread we know and love.

This keto cornbread will be the perfect accompaniment to your keto-friendly chili or soup. But before we delve into the ingredients and instructions, there are a few key things to bear in mind before you fry up your skillet and start mixing your batter.

A Few Things To Bear In Mind 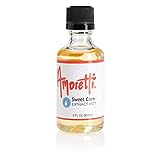 Okay, now we’ve got a few of the do’s and don’t out of the way for our keto cornbread, let’s move onto the main event… the recipe itself!

As you can see below, the metrics for the keto-friendly cornbread conform perfectly to the ketogenic specifications, with low carbs and calories, moderate protein levels and a high percentage of fat. In short, this bread will not put a dent in your ketogenic diet.

Most cornbread is fashioned out of flour, sugar and corn which are all very high in carbohydrates, so generally it is not that good for a strict keto diet.

How Can I Store My Keto Cornbread?

You can simply keep your keto cornbread in the skillet, wrap it in cling film or cover it with tinfoil and store it in a warm, dry place.

You can also cut your cornbread into slices and store them in airtight containers. Keto cornbread will usually stay fresh for 3-4 days after baking.

Can I Freeze Keto Cornbread?

Yes, keto cornbread can be easily frozen by cutting it into slices and wrapping it in clingfilm to avoid freezer burn. Keto cornbread will last around 2-3 months in the freezer.

When you are ready to devour your keto cornbread, just unwrap and allow to thaw at room temperature for a few hours. However, if you’re in a rush, defrost the cornbread in the microwave and reheat for that toasty cornbread texture!

Can I Make Keto Cornbread Muffins?

You certainly can, and a lot of people prefer to! All you need to do is use a parchment-lined muffin tin rather than a skillet, allowing for a slightly faster baking time of 25-30 minutes. We recommend adding a low-carb sweetener such as stevia for that quintessential sweet muffin experience!